On Tuesday afternoon we welcomed Vernon Kay along with two NFL UK coaches, Jason Brisbane and Phoebe Schechter, both of whom have NFL experience, to host an assembly and then run an hour long coaching session for some of the senior boys.  Given the now enormous popularity of the sport in the UK, and here at Davenies, the energy, enthusiasm and skill demonstrated by all three served only to fan the flames of that passion, and perhaps even ignite it in a few more!

Following on from a highly energetic assembly, during which the boys demonstrated an in-depth knowledge of the game (as well as some fairly impressive catching skills!) a select group of Year 7 and 8 boys headed out to the Astro, where they were treated to a full-on NFL-style training session, during which the learned to run a hook, slant or fade route, the best way to catch an American Football and how to carry it safely once they had done so.  It was quite incredible to see the rate of improvement over such a short period of time and, of course, just how much every single one of those very fortunate boys enjoyed themselves!

As with all good sessions, they finished with some six-on-six Flag Football, giving them the opportunity to put in to practice all that they had learned before, something they did very impressively throughout.  Who knows where some of these boys might be in a few years’ time..?  NFL here we come! 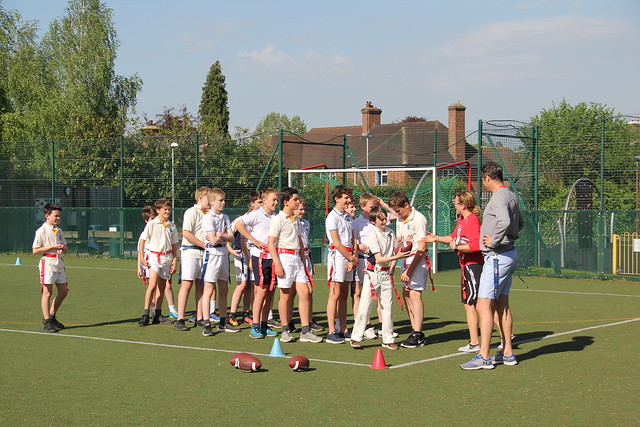